SACRAMENTO — Today the Senate Public Safety Committee approved SB 1487, the Iconic African Species Protection Act by Senator Henry Stern (D-Canoga Park) in a 5-2 vote. Strongly opposed by the National Rifle Association, this bill would make California the first state to prohibit the possession of the body parts of eleven endangered species, including lions, elephants, rhinoceroses and giraffes, that have been heavily targeted by trophy hunters and animal traffickers.

“The choice is pretty simple. Where do you think these animals belong? Is it out in the wild, or is it above your mantel?” Senator Stern asked. "There is actually more money for poor African nations and for conservation with these iconic species in the wild."

The bill follows a decision earlier this year by the Trump administration to allow importation of lion and elephant trophies, reversing an earlier ban, despite the president himself once calling trophy hunting a “horror show.” The severe threat to the targeted animals was underscored last month by the death of Sudan, the world’s last male Northern White Rhinoceros.

“Trophy hunting benefits no one. Study after study reveals that the purported economic benefits to communities, promised job creation, and alleged conservation benefits from trophy hunting never materialize,” renowned scientist Jane Goodall wrote in a letter sent to Senator Stern in support of the bill. “In passing the Iconic African Species Protection Act, California will be setting an example that can be championed in state legislatures across the country.”

In a letter of support for the bill, the Lieutenant Governor Gavin Newsom wrote, “At a time of rapid and alarming biodiversity loss, it is wholly inappropriate to support the killing of threatened species for entertainment.”

Before the vote, the author, sponsor and other supporters of the bill met with members of the news media to make statements and answer questions in the State Capitol.

Brendan Cummings, Conservation Director at the Center for Biological Diversity, stated, “This bill is not just symbolically important but one that will ultimately have meaningful impact on the ground, while helping ensure that Californians are no longer complicit in driving the extinction of some of the most imperiled and iconic species on the planet.”

Next stop for the bill is the Senate Floor, where it will be voted on later this spring.

Henry Stern is Chair of the Senate Committee on Elections and Constitutional Amendments, and the first millennial elected to the Senate. Senator Stern also serves on Energy, Utilities and Communications, Environmental Quality, Judiciary, and Natural Resources and Water. He represents nearly 1 million residents of the 27th District living in east Ventura County and northwest Los Angeles County. http://sd27.senate.ca.gov. 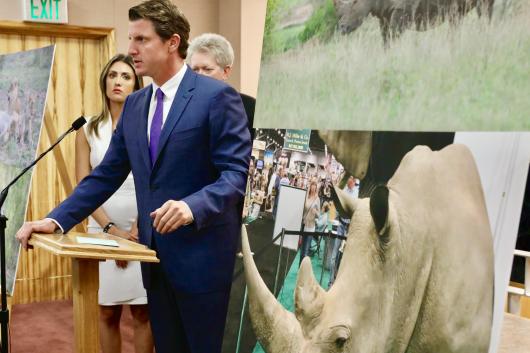 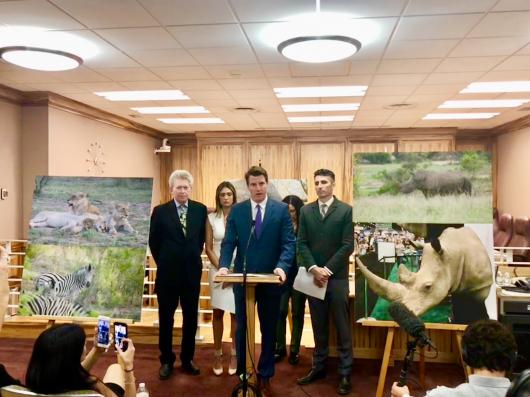 Pictured Above: Senator Stern (center podium) with Brendan Cummings from the Center for Biological Diversity (left), Katie Cleary from World Animal News (second from left) as well as Judie Mancuso (back middle) and Nickolaus Sackett (right) from Social Compassion in Legislation speaking in support of SB 1487 at a State Capitol press event on 4/24/2018.